Thursday, 23 Aug 2012, Larrabasterra beach:
On the day after my birthday, it was “big cock day” at Larrabasterra beach (aka Barinatxe, La Salvaje, Sopelana) near Bilbao. I was standing by my towel, at the nakeder section of the beach, when this short man in his 40s/50s approached me and asked: “Can you speak English?” I said  "yes." “Are you sarezale on flickr?” I nodded again. “I follow your photostream on flickr. I’m one of your contacts.” He was from Florida living in Pamplona with his wife, while having an affair with a local boy. “I thought it was you,” he insisted, “you’ve got a look.” Whatever he meant.

I must admit that the whole hippy vibe started to grate towards the end… Especially the mock hippy vibe: Blackberries, iPhones, iPads by the beach, champagne (or mojito) socialists sitting on cushions at cocktail bars decorated as Bedouin tents, dearer-than-average accommodation and food at exclusive venues, fancy cars and cameras, designer beachwear in nudist beaches, itinerant merchants with their business URLs on their belt, over-priced sarongs at handicraft flea markets, VISA and Mastercard,…  & of course, plenty of tattoos and earrings, uneven haircuts and rasta dreadlocks, ubiquitous hash, ubiquitous dogs (and their shit), baggy cotton trousers, waitresses with loose leopard print tops, old hippies singing flamenco to the strumming of Spanish guitars played by naked young men by the beach, a refusal to use deodorant,… and not a single bank in the whole resort! In any case: a beautiful, wonderfully relaxing place to spend a sunny week at the end of August. Very laid back and open minded.

(google-translate at your own risk)
Posted by Ernesto Sarezale at 19:15 No comments:

...at Poltroon, the literary saloon where a baboon will give you a balloon...
http://www.poltroon.org.uk/nights/poltroon/the-aftermath-and-average/
Posted by Ernesto Sarezale at 18:42 No comments: 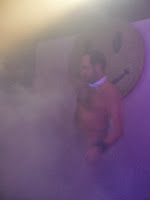